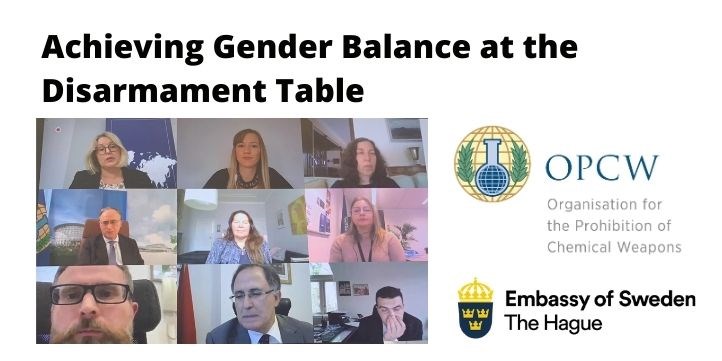 OPCW and Sweden Highlight Need for Gender Diversity in Disarmament

Improving gender balance at the Organisation for the Prohibition of Chemical Weapons (OPCW) and across other disarmament forums was discussed yesterday by OPCW Member States and Technical Secretariat staff during an online event co-hosted by the OPCW and the Embassy of the Kingdom of Sweden in the Netherlands.

The Permanent Representative of Sweden to the OPCW, H.E. Ambassador Ms Annika Markovic, remarked: “To attain gender balance in the OPCW, it is crucial to create a supportive working environment. This is our common responsibility as States Parties and as representatives of the Organisation and it could include capacity building activities, flexible working conditions, paid parental leave, and effective measures against all forms of harassment.”

Ambassador for Disarmament and Non-Proliferation at the Ministry for Foreign Affairs of Sweden, H.E. Ms Ann-Sofie Nilsson, underscored that “The under-representation of women at the disarmament table is quite striking and needs to be not only discussed, but acted upon. Equal representation is an important first step but should be followed by other measures that promote an equal playing field for participation.”

The Director-General of the OPCW, H.E. Mr Fernando Arias, expressed: “To succeed, we will need to harness the talents of the best and the brightest from all States Parties.” He further stressed that at the OPCW “we believe that our diversity is and will be even more so our strength”. The Director-General noted the reforms implemented under his leadership, including – for the first time in OPCW’s history – the 50 percent representation of women in the top management structure. He described numerous initiatives for inclusivity in the workplace, including training, the establishment of Gender Focal Points, and a gender and diversity audit. Director-General Arias highlighted his particular pride in the OPCW’s annual Women in Chemistry Symposium, which explores opportunities and challenges for women working in the chemical sciences, academia, and industry.

Senior staff of the Technical Secretariat spoke about the experience of women in leadership, the implementation of gender mainstreaming in the work of the International Cooperation and Assistance Division, and provided further details about the initiatives related to gender representation and the ongoing gender audit.
The event gathered 140 participants who discussed successes, lessons learnt and best practices to advance a more equitable gender balance and inclusion in the field of disarmament. In addition to the OPCW Technical Secretariat staff, the attendees represented more than 40 Member States.

- Background -
The International Gender Champions is a global network of major decision-makers committed to improving gender equality in their organisations. The group comprises over 250 active Champions in leadership positions. OPCW Director-General, H.E. Mr Fernando Arias, joined the network in 2018.

As the implementing body for the Chemical Weapons Convention, the OPCW, with its 193 Member States, oversees the global endeavour to permanently eliminate chemical weapons. Since the Convention’s entry into force in 1997, it is the most successful disarmament treaty eliminating an entire class of weapons of mass destruction.

Over 98% of all declared chemical weapon stockpiles have been destroyed under OPCW verification. For its extensive efforts in eliminating chemical weapons, the OPCW received the 2013 Nobel Peace Prize.