Presentation of Letter of Credence

On Friday 3 September, Ambassador Urban Sjöström was given audience with the H.E. Dr. George Manneh Weah, President of Liberia in order to present his Letter of Credence from His Majesty, Carl Gustaf XVI, the King of Sweden. The ceremony took place at the Jamaica resort. 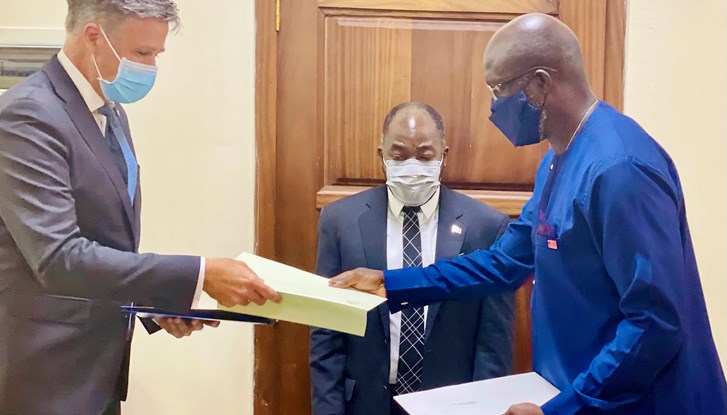 During the ceremony hosted by H.E. President Weah, and joined by Foreign Minister Dee Maxwell Saah Kemayah and Minister of State Nathaniel F. McGill, Swedish Ambassador Sjöström emphasized the excellent and long-standing bilateral relations between Liberia and Sweden based on friendship and mutual understanding, as well as common views on many international issues, democracy, and human rights.

Ambassador Sjöström expressed his wish of a continued close relationship and collaboration with His Excellency, the Government and people of Liberia in relations to supporting the Pro Poor Agenda for Prosperity and Development (PPAPD). The new Swedish development cooperation strategy with Liberia covers Human Rights, democracy, the rule of law and gender equality; Peaceful and inclusive societies; Inclusive economic development; Environment, Climate and sustainable use of natural resources with an overall financial envelope of approximately 200 MUSD over a five-year period.

Furthermore, Ambassador Sjöström offered his appreciation for His Excellency as a champion for gender equality and reassured that Sweden fully support Mr. President own commitments to gender equality. Sweden, with its Feminist Foreign Policy will continue to support strengthened gender equality, empowerment of women and contribute to the fight against all forms of Sexual and gender-based violence.

Ambassador Sjöström is now officially the Ambassador of Sweden to Liberia.

Back To Liberia, Monrovia