As part of the Women's Day celebration in 2021, we have chosen to showcase how Sweden's support to Makerere University helped to facilitate the creation of the School of Gender at the institution. We spoke to Consolata Kabonesa, the Principle Investigator of the Gender Mainstreaming Projectat the School of Gender, to learn how this support has impacted the School and the University at large. Here is what she had to share with us. 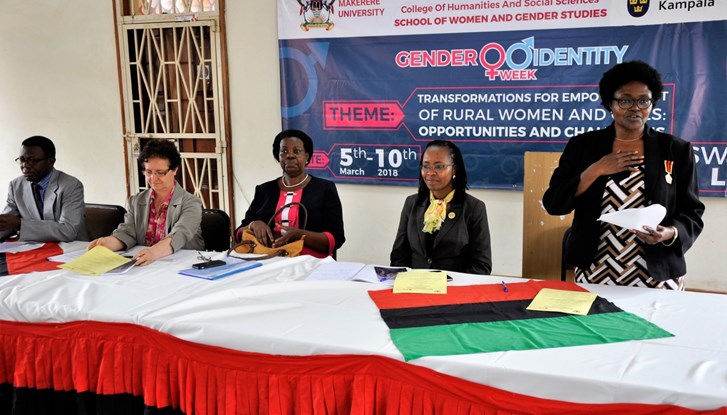 Who is Dr. Consolata Kabonesa?

I am an Associate Professor at the School of Women and Gender Studies, College of Humanities and Social Sciences, Makerere University, Uganda. She has over 25 years of experience as a gender analyst, trainer and facilitator in areas of gender, land, health, gender budgeting, employment and human rights and gender and Information Communication Technology.

I attained a Ph.D. in Human and Community Development with a minor in Gender Relations in International Development, and MS in Human Development and Family Studies from the University of Illinois at Urbana-Champaign, USA; MA in English and American Literature and Higher Diploma in Education from University College Dublin, Ireland; and BA in Liberal Arts from Stonehill College, Massachusetts, USA.

My areas of research interest include issues that affect gender relations and human development particularly in education, gender based violence, Technology, budgeting, health (HIV/AIDS), land tenure systems, and climate change among others.

How was the School of Gender in Makerere University formed?

According to Celebrating 10 Years of Existence Report (2002), Sida was one of the initial funders of the Department. Sida provided financial and technical support to the formative stages of the Department. In 1998 Sida’s financial support went to improving the Department’s publication programme. The Department worked with other units to ensure that researchers integrate gender in their work; published gender students’ dissertations; acquired locally produced materials and government documents for the department’s library; and supported the initial process of gender mainstreaming and setting up of the Senate Standing Committee on Gender Mainstreaming. The committee worked on the establishment of the Directorate of Gender Mainstreaming.  Since 2002 Sida has continued to support gender mainstreaming activities at Markerere University. During the current and final phase of the support, these activities are done in collaboration with Gothenburg University. Other supported areas include capacity building (MA/MSc and PhD student training) training and mentoring in PhD supervision, research and scholarly writing.

In 2010 the Department became a School to enable it grow departments focusing on the different expanding themes within Gender Studies. The School is at the forefront of academic and community initiatives to address gender and development issues from an African perspective.

What are the main achievements that the School has made since it received support from Sweden?

The School has achieved visibility globally. It currently hosts the African Research Universities Alliance (ARUA) Centre of Excellence in Notions of Identity, which focuses on deepening scholarship on Identities in Africa and Beyond.

The School expanded it programmes/activities to include:

1. PhD in Gender and Development

5. BA in Gender and Development (under BASS)

The School has graduated 10 PhDs and four of these were funded through the Sida programme. The School has also successfully trained staff at the participating Universities (Mbarara University of Science and Technology, Gulu University, Kyambogo University and Busitema University) in conceptual clarity of gender, Gender mainstreaming and creating a gender responsive curriculum. The School also provided technical support to these Universities to complete their University Gender Policies.

The school has also imparted skills in gender and responsive budgeting to members of staff at the five public Universities and has stimulated and propagated intellectual discourse related to gender issues in society. We have also mentored gender students to organise and participate in gender dialogues.

Our programs have enhanced knowledge and skills in gender analysis and has assisted staff in writing research proposals. Three of our post doctoral candidates have won other grants: Victoria Namuggala (AMREF), Dr. Ruth Nsibirano and Dr. Evelyn Lutwama Rukundo (Andrew Mellon). This has increased the number of publications focusing on gender in the Makerere University.

What is the impact of the School on gender programming within Makerere University?

A number of units offer gender related courses in their disciplines. There is also an increased appreciation of gender issues in the university, for example, members of staff from Women and Gender have been appointed co-supervisors, examiners or opponents for PhD candidate’s defence.

There is also an increased collaboration with science units for support as gender experts on projects/curriculum development/research.

Any comments or additions?

In conclusion, the support from Sida has built our capacity which is exhibited in the current programmes, networks and collaborations. The School has greatly influenced the gender terrain at Makerere University and other public institutions in Uganda as well.

Back To Uganda, Kampala