“Albert Einstein was totally groundbreaking and fundamentally changed physics from the Newtonian comprehension of the world to modern physics. His work is extremely important. Without it, the world would be a very different place deprived of inventions that all of us rely on in our daily life. The last five years two Nobel prizes in Physics were directly related to his findings”, says Johan Robertsson, Swedish scientist working at ETH Zürich. Inventions such as the GPS, laser tools and the photocells in solar panels all have direct connections to Einstein’s discoveries.

Professor Johan Robertsson (right) with engineer Christoph Bärlocher in the laboratory at ETH in Dübendorf, Zürich

Johan Robertsson is Professor of Applied Geophysics at the prestigious ETH, Eidgenössische Technische Hochschule, in Zürich. It is the same university where Albert Einstein worked as a professor from 1912 to 1914, during which he completed the fundamentals of his general theory of relativity.

Johan Robertsson’s field of investigation is how to use seismologic methods to understand the earth’s interior. He and his group are involved in several projects within this field, some of which are carried out in Switzerland. One example is mapping glaciers to calculate the volume of ice, particularly important in times of climate change. Another project uses geophysics to predict landslides in the alps before they happen. A third project explores the possibility of extracting heat from the ground with the intention of converting the heat to green electricity.

Johan Robertsson’s team also participates in a mission on the planet Mars. For almost three years the Insight lander carrying a seismometer to detect “Marsquakes” – earthquakes on Mars – has been stationed on Mars.
“During this time, hundreds of Marsquakes have been detected”, says Johan Robertsson.
By analysing the Marsquakes the scientists can understand the structure and composition of the planet deep inside all the way to its core.
“We can see that Mars’ structure is similar to the Earth’s, although with some very important differences. For one thing, plate tectonics was never set in motion on Mars as it was early in Earth’s history.”

Seismology is about understanding seismic waves. A central theme in the research in Johan Robertsson’s group is therefore wave propagation. Gravitational waves is a consequence of Einstein’s theory of general relativity. Together with another professor in the Earth Science department at ETH, Johan Robertsson and his co-workers are involved in an ambitious project to place spacecrafts in orbit around the sun to detect gravitational waves at a level that is impossible on Earth. In some sense, the spacecrafts can be thought of as a giant seismometer with a diameter of 2.5 million km and will, if everything goes according to plan, be launched in 2033.


It has taken 100 years to prove Einstein’s predictions

To explain how significant Einstein’s work was, Johan Robertsson explains that two of the last five years Nobel prizes in Physics, the one in 2017 and the one in 2020, were directly related to Einstein’s findings.

In 2017 the Nobel Prize was given to scientists at the Laser Interferometer Gravitational-Wave Observatory (LIGO). At the observatory the gravitational waves originating from distant sources in the universe where, for instance, black holes merge, were observed for the very first time. Gravitational waves were predicted by Albert Einstein over a hundred years ago but have not been observed until now.
“The discovery and observation of gravitational waves have made it possible to observe the universe in a completely new way. Think of a blind person who can hear and who suddenly gets his vision back. Such a person would be able to perceive the world in a very different way compared to only having had his hearing to rely on”, says Johan Robertsson.

In 2020 the Nobel Prize was awarded three researchers whose discoveries were related to the black holes in the universe and, in particular, in the center of our own Milky Way galaxy. Roger Penrose, one of the three, showed that black holes are a direct consequence of Albert Einstein’s general theory of relativity. By using new mathematical concepts Penrose established that black hole formation is a stable process. His ground-breaking article was published in 1965 and is still regarded as the most important contribution to the general theory of relativity since Einstein. Reinhard Genzel and Andrea Ghez, who also received the Nobel Prize in 2020, have produced the most convincing evidence that black holes exist.
“Although black holes were predicted using Einstein’s general relativity theory already in 1915, Einstein himself actually did not believe that they could exist for other reasons. It took almost 100 years before their existence could be established”, says Johan Robertsson.

The GPS, laser tools and photocells for solar energy – all based on Einstein’s findings

Albert Einstein was awarded the 1921 Nobel Prize in Physics "for his services to theoretical physics, and especially for his discovery of the law of the photoelectric effect.”

Johan Robertsson says Einstein’s explanation of the photoelectric effect was another ground-breaking theory that broke with conventional wisdom at the time.
“It explains that light sometimes can act as waves and sometimes as particles. This understanding is fundamental in many tools and instruments that are very common today.”, says Johan Robertsson.

One example that Johan Robertsson mentions is the production of solar energy with photocells. Photocells for solar energy transform light to electricity. The photons collide with the solar cell and generate an electric pulse.
“To understand why and how this happens – that was what Einstein did. If you want to build efficient solar panels you need to understand the photoelectric effect theory.”

The GPS used for positioning is also a tool based on Einstein’s work, but in this case the general theory of relativity.
“The general theory of relativity is crucial. If you want to have the accuracy of a few meters from a GPS system, the distortion of time-space by gravity resulting in clocks running slower in the GPS satellites than on Earth must be taken into account”, says Johan Robertsson.

He also explains that Einstein’s work on Planck’s theory of radiation and his light-​quantum hypothesis from 1917 set out key principles that would come to be crucial in the development of laser technology in the 1950’s.

Twenty-one Nobel Prize laureates have had a connection to ETH, the university where Johan Robertsson is working. Albert Einstein was the sixth ETH professor to receive the award.

“Different disciplines have periods in time when a lot of progress is made. With Einstein, the field of Physics went through such an epoque; Einstein’s work fundamentally changed Physics as scientists knew it since Isaac Newton’s days, opened up new research fields which have resulted in inventions and machines that we take for granted today”, says Johan Robertsson.

When it comes to the memory of Einstein at ETH Johan Robertsson says that lecture halls are named after Albert Einstein as well as a street and a canteen. There is also a discussion at ETH on the creation of an “Einstein Center of Science” where scientists from different disciplines would come together.

“Einstein is without a doubt the most famous person in the history of ETH. Very few people have been as significant and influential as Einstein”, Johan Robertsson concludes. 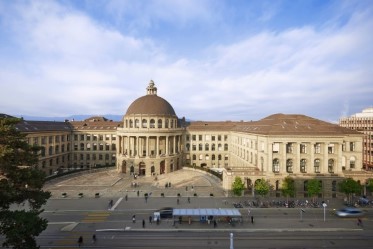