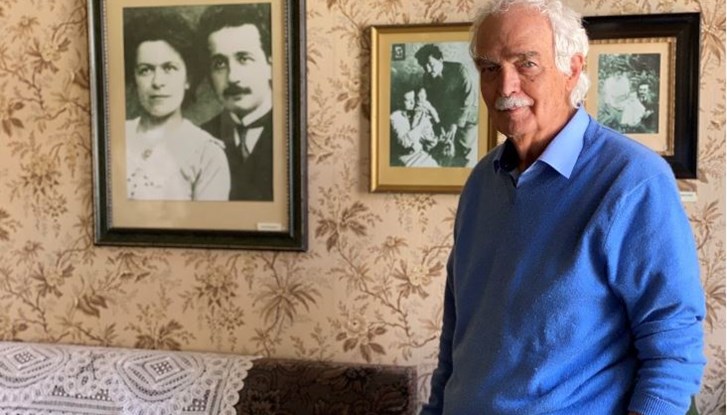 Professor Hans-Rudolf Ott next to a photo of Mileva Maric and Albert Einstein in the Einsteinhaus. Photo: Sofia Karlberg

Hans-Rudolf Ott is an expert on Albert Einstein. He is also the president of the Einstein Society Bern and Professor of Physics, working at ETH Zürich where Albert Einstein taught between 1912 and 1914.

“Albert Einstein counted on the Nobel Prize. In 1914 when he separated from his wife Mileva Maric, she would not agree to a formal divorce. Later, in 1918, he asked her again to agree to a divorce and offered her to receive the Nobel Prize money if he ever would get the prestigious award”, says Hans-Rudolf Ott.

He continues: “In 1915 Albert Einstein succeeded in formulating the General Theory of Relativity and Gravitation. The theory used mathematical tools that were not widely known at the time and therefore, only a few specialists were able to appreciate its content. A year later, another of Einstein’s theories, the Law of the Photoelectric Effect which is based on the light-quantum hypothesis, was experimentally verified by Robert Millikan. In 1919 one of the predictions of the General Theory of Relativity was verified by a British team. The data collected by the British team was claimed to quantitatively confirm Einstein’s theoretical prediction. This made a headline in the British newspaper The Times. Albert Einstein gained world prominence, but was still not awarded the Nobel Prize.”


Difficult task for the Nobel Committee

Hans-Rudolf Ott thinks the Nobel Committee for the Physics award faced, and still does, a difficult task. Alfred Nobel’s will states that the Nobel Prize be awarded to “those who, during the preceding year, have conferred the greatest benefit to humankind.

“It was not easy to interpret the will, the Nobel Prize was still quite young, and it was not clear at the time what Einstein’s work meant for humankind. A lot of his discoveries were proven and valued only  much later. With respect of his General Theory of Relativity, just a few of his contemporary peers actually understood what he had done.”

When the Nobel Committee finally awarded Albert Einstein with the 1921 prize in 1922, he had been nominated more than 60 times. He was honoured with the Nobel Prize for his discovery of the Law of the Photoelectric Effect and his contributions to theoretical physics in general.
“Einstein’s Law of Photoelectric Effect had been experimentally verified in 1916. Therefore it was, to some extent, more in line with the Nobel committee’s directives to award Einstein for this work.”

In his otherwise so detailed diary Albert Einstein doesn’t mention the day he finds out he is laureated:
“Because he was so sure he deserved it and eventually would get it”, says Hans- Rudolf Ott.

Shortly after having moved to Berlin in 1914, Albert Einstein separated from his wife Mileva Maric, a former study colleague at the Zürich Polytechnic. Maric returned to Zürich with the couple’s two sons, while Einstein stayed in Berlin.

“At the time of the separation Einstein had a high income. However, after the first world war the German currency lost its value and suddenly Einstein found it impossible to pay the agreed allowance to his former wife who lived in Switzerland”, says Hans-Rudolf Ott.

The Nobel Prize being paid in Swedish kronor gave Einstein the economic freedom to offer his former wife what he had promised. The prize sum was 121 572 kronor, almost 50 times Einstein’s yearly salary at the time. Part of the money was used to buy a house in Zürich and the rental income of the rest of the money secured the living costs of Mileva Maric and the two sons.

“Viewed in this light, the award of the Nobel Prize was not only a well deserved recognition of Einstein’s scientific achievements, it also prevented his financial ruin and secured the financial support for his former wife and the children”, says Hans-Rudolf Ott.