The Embassy’s task is to represent Sweden and the Swedish Government and to promote Swedish interests in Latvia. We do this by having a continuous dialogue with the Latvian Government and general public including people representing business, culture and media sector as well as vast number of civil societies and discussing matters that are relevant to both countries and are locally, on EU level and globally meaningful. We work closely with other Swedish organisations in Latvia such as the Swedish Chamber of Commerce in Latvia and Stockholm School of Economics in Riga. 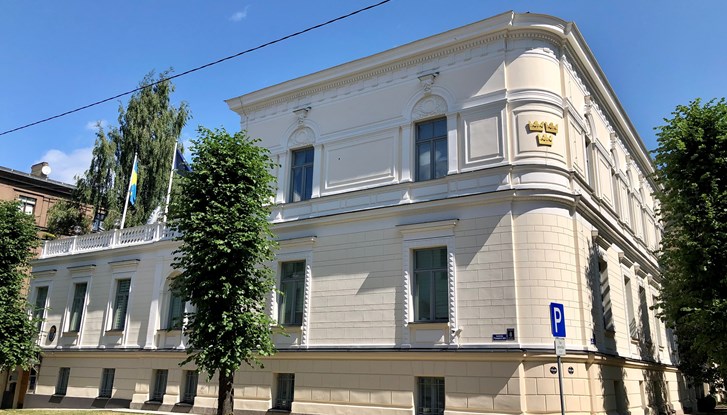 We are 13 people working at the Embassy; five posted diplomats and eight locally employed. Ambassador Karin Höglund is the Head of Mission since 1 September 2020.

The Embassy of Sweden in Riga is located in the park and boulevard area that, along with Riga's historic centre, is on the UNESCO World Heritage List since 1997. The building was designed by the renowned Baltic German architect Heinrich Scheel in the 19th century. Later it was sold to the von Lövis Menar family. Colonel von Lövis Menar and his wife von Meck had eleven children and the large family lived comfortably in the modern building. The house had central heating and a lift carried food from the kitchen the basement to the dining room on the first floor.

When Sweden sought new premises for the mission in Riga in 1938, this building was deemed to be the most suitable. Negotiations were well underway when the deal was terminated, citing that the building was too expensive. The following year, World War II broke out and Latvia was occupied by the Soviet Union. The building that almost became the Swedish embassy ​​was nationalized, and used as educational premises for workers, as well as a large kitchen and dining space for Soviet officer families and, from 1952, as premises for the Latvian Teachers' Union.

After the dissolution of the Soviet Union, Sweden was the first country to re-establish its presence in Riga. The Mission was established in temporary premises, and the question of purchasing the now neglected building on the corner between Jura Alunāna iela and Andreja Pumpura iela became relevant again. This time it was not perceived as being too expensive and Sweden bought the building for the symbolic purchase price of one Latvian ruble. On Christmas Eve 1992, the building was handed over to the Swedish state. To commemorate the event, a brass plaque, signed by King Carl XVI Gustav, was put up on the façade facing Jura Alunāna iela.

Back To Latvia, Riga