30 years ago, 10-17 December 1988, Sweden’s first international rescue mission was carried out. The request for help came from the former Soviet Union, which suffered from its biggest disaster since World War II - a devastating earthquake in Armenia.

In 1988 Sweden was not prepared for international rescue missions, but in a very short amount of time a rescue group of 50 people was assembled. Together with 16 rescue dogs and assistance material, they flied to the Soviet Republic of Armenia in two Hercules airplanes borrowed from the Armed Forces. The first specific operation was taken on December 11 in a half-demolished textile factory.

Many lives were saved as a result of the Swedish initiative, which became the starting point to a series of international efforts and well-known operations by the Swedish Civil Contingencies Agency. The lessons learnt from this operation were most crucial.

Here is the story of how Sweden received its first request for an urgent rescue mission in another country and how the operation was implemented.

No one was prepared, but it mostly worked out 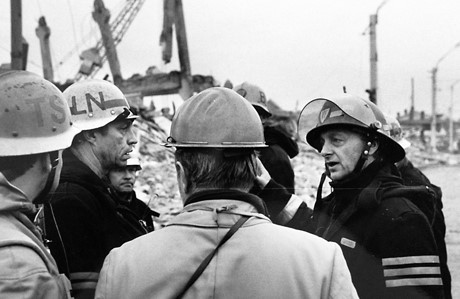 The earthquake hit without any warning at 11.41 on Wednesday, December 7, 1988 in Leninakan, a city as big as Malmö located in the northwestern part of the Soviet sub-region of Armenia. At least 25,000 died directly in Leninakan and other affected places, while thousands were heavily injured.

Many became buried alive under the rubbles. There is no exact number of casualties, it varies from 25,000 to 50,000. In the smaller town of Spitak near the epicenter of the earthquake, 4,000 out of 15,000 inhabitants died. All in all, about half a million people became homeless. It was the worst catastrophe that hit the Soviet Union after World War II.

The operation group consisted of both military and civil rescue officials, firefighters Kenneth Johansson and Perry Bylin in the background as well as volunteer civil defenders and rescue-dog handlers Per-Arne Hallberg (with his Ceasar) and Agnetha Eriksson (with Raffi). 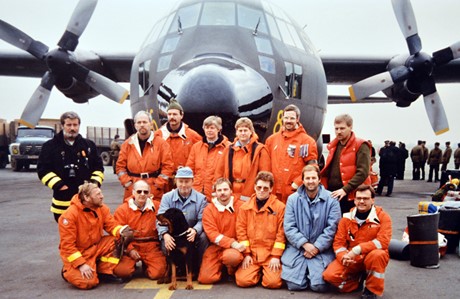 The first operation was carried out in a demolished textile factory 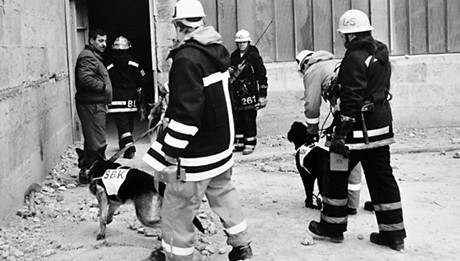 The first Swedish international rescue mission started here under the leadership of Lennart Sommar (far right) in a partially demolished textile factory in Leninakan. The task was to find survivors under the rubbles with the help of rescue dogs.

The first Hercules landed in Moscow at 17.40 local time, the other at 19.15. This was followed by a bureaucracy that made everyone in the group somewhat insane. For six hours they were forced to wait at Moscow airport for their visas to be completed. The only positive thing about this delay was that it gave the operation chief Lars Henricsson an opportunity to organize the assembled forces.

05.20 on Sunday, December 11, the group landed in Yerevan, which was not severely damaged by the earthquake. To the surprise of the group, the unloading of the Hercules went beyond all expectations, mainly thanks to the students from Leninakan. It was their way to help their home city.

07.48: The line of two buses and seven trucks left the airport with destination Leninakan situated within 12 miles in the north with an altitude of over 1500 meters. Today, Leninakan is renamed to Gyumri, a city where the Swedish-Armenian wrestler Ara Abrahamian grew up.  He was 13 years old when the devastating earthquake took place.

At the time Leninakan was a closed city for foreigners. Thus, the Soviet military in roadblocks (tanks and heavily armed military) was initially unsure whether they would let the group in. Yet it was about saving lives under the rubbles, and the Swedish forces were among the first foreigners on spot. Somehow orders arrived from the highest level that they should be taken care of.

Read more about the story of Swedish rescue servicemen here: 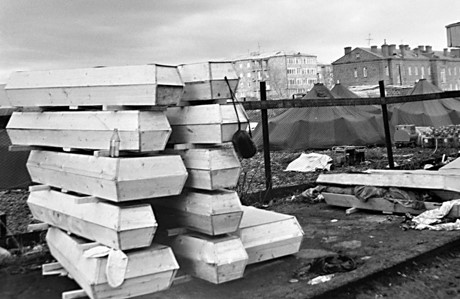 The Swedish group was hosted in a military camp in Leninakan, adjacent to the partially demolished factory. Many of the victims taken out of the ruins were placed in wooden coffins on the sidewalk right next to the Swedish camp. 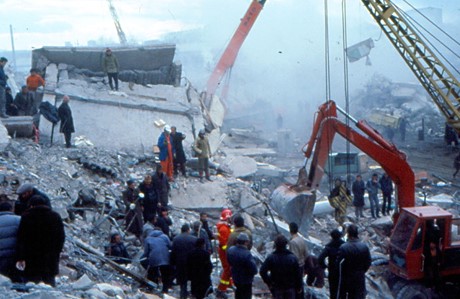 This was the environment where the Swedish group worked- nine or twelve-store houses that had collapsed. In the picture, Lars Zetterström in orange coordinates the search.

Facts about the operation in Armenia

Three forces were sent - here is the entire unit

The majority of those who were part of the Swedish force gathered before the trip to Sweden.

50 people were included in the forces sent by Sweden through the Swedish Rescue Services.  It took place in three stages.  The main group of 37 people and 16 rescue dogs left Sweden on December 10, group 2 consisting of 11 people took off on December 12, and group 3 of 2 people traveled on 14 December.

The main task of Group 1 was to save people still alive under the ruins, while the other two forces had a primary task of delivering materials to the homeless and other distressed people.

The forces had the following composition:

Group 3: Claes-Göran Karlsson and Per Enerud.

Text (originally in Swedish) and photo by Stig Dahlén, who was the editor of the Swedish Rescue Service's newspaper Sirenen in 1988 as well as part of the first group sent to Armenia. The article has been translated and modified by Razmik Sargsyan to be published by the Embassy of Sweden in Yerevan on the occasion of the 30th anniversary of the earthquake.

Back To Armenia, Yerevan