Welcome to the Embassy of Tallinn, Estonia 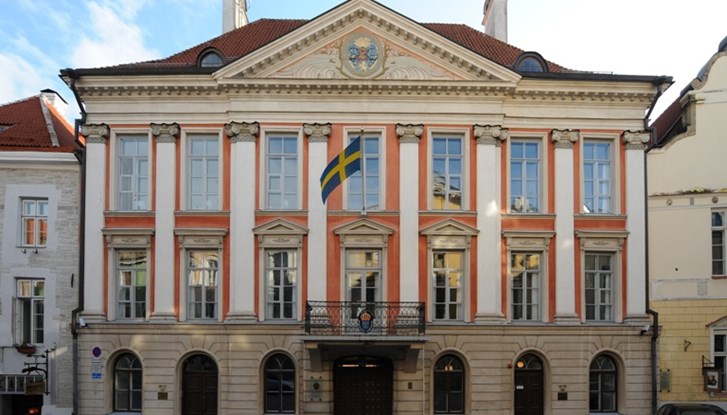 The palace of the von Rosen family on Pikk 28 is one of the few buildings in Tallinn that was built during the Swedish period. The simple reason is that Tallinn was already completed when the Swedes arrived in 1561. The palace, which is considered to be one of the most magnificent noble houses of the city, was built in the 1670's and its exterior is still today the finest example of classical baroque style in Estonia. The rustic work on the ground floor, the facade harmonically decorated with colossal pilasters, and the high hip-roof makes the building unique in Tallinn.

The building proprietor Axel von Rosen was born in Ingermanland in 1624 and was the son of Bogislaus von Rosen, the governor, who was a very wealthy man that generously donated large amounts of money to the Crown when Gustavus II Adolphus prepared his army for the Thirty Years' War. It was also from him that Axel von Rosen eventually inherited the piece of land on Pikk 28. After studying first at University of Uppsala, and later at a few other universities in Europe, Axel von Rosen was asked by his father to come home to Estonia. There he in time was appointed vice-president of the court of appeal in Tartu, and a few years later governor of Estonia.

When Axel von Rosen received the piece of land on Pikk 28 there were a few decayed houses that he had to pull down, since the city government considered them to disfigure the elegant street. Shortly afterwards there was complaints that the ground had not been built on, so by the end of the 1660's drawings of a new house were presented. However, there was still dissatisfaction since von Rosen's plans did not follow the prevalent building style in which the gable was turned towards the street. When the construction finally had begun the neighbours, the Blackheads' fellowship, were not content and claimed that the new house would block the view from their windows. In spite of the protests and complaints Axel von Rosen completed the building of his palace during the early 1670's. The architect it is not known today.

Axel von Rosen was not himself able to enjoy his beautiful baroque palace for more than a few years before he passed away. After his death the building stayed within the von Rosen family for a couple of generations, but by the end of the 18th century the property was sold to Vice Admiral Palaenskoy, and was used as the Admiralty. During the following decades the house changed owners several times and each holder carried through extensive rebuilding works. In time even the interior of the house had lost its original 17th century character. During the Soviet era the State school for engine-drivers was situated in the palace. Considering the condition the building was in when the Swedish State took over the contract on 1st of January 1992, no particular respect had been paid to its historical value.

One single room – the former assembly room of the palace – showed traces of the baroque, and for example the height of its tall ceiling is different from the rest of the rooms. When the building was renovated these traces were used to restore its 17th century character to the extent that it was possible. Through Sweden's acquisition of the palace on Pikk 28, and the accommodation of the Embassy since 1994, its Swedish past is united with the present.