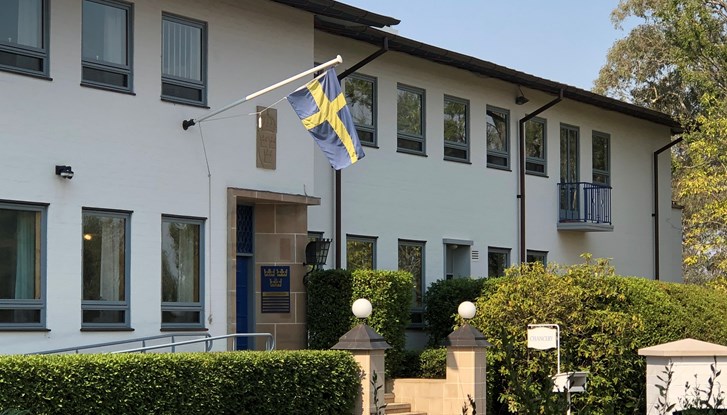 The Embassy of Sweden is one of the oldest embassies in Canberra, the building was inaugurated in 1951. The Embassy is a white two-storey building with Scandinavian features such as a copper roof and it is surrounded by a large garden.

The Embassy in Canberra consists of three sent-out diplomats from Stockholm, a Defense Attaché and seven locally engaged staff.
A central mission for the Embassy is to follow up and report on the development in the region, such as domestic political affairs including human rights, foreign policy, regional and multilateral cooperation, climate and environment as well as economy and trade.

Trade and Sweden Promotion play an important and comprehensive role in the Embassy's work. The Embassy can be found in social media channels, such as Facebook, Twitter, Instagram and LinkedIn. In 1911, the Swedish-Australian Chamber of Commerce was established, one of the first foreign chambers in Australia. Australia is Sweden's fourth largest export market outside Europe. Over 500 Swedish companies are represented in Australia, operating in the fields of mining, pharmaceuticals and med tech, transport, telecommunications, infrastructure and defense. Free Trade negotiations between the EU and Australia were initiated in 2018.

The Embassy's migration section handles applications about visas and residency permits for Sweden.

The role of the Embassy's Defense section is to represent the Swedish Armed Forces in Australia.

In New Zealand Sweden has two honorary consulates, in Auckland and Wellington.