Three Swedish films will be presented at the Mill Valley Film Festival 42 on October 3-13, 2019. This year's film festival will have a Swedish film focus comprised of diverse and exceptional work of different Swedish film makers. 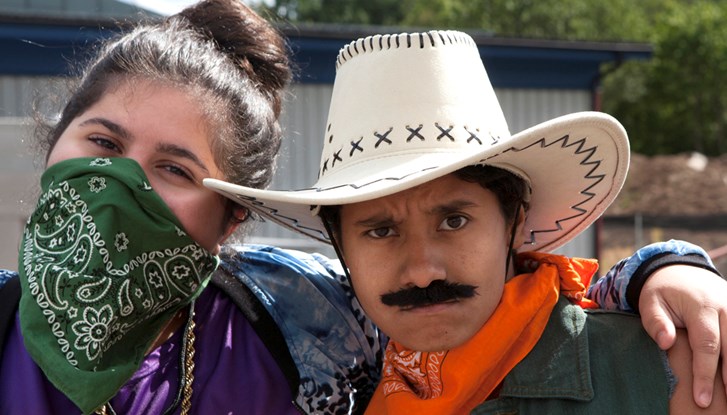 FOCUS - EYE ON SWEDEN
A celebration of superb storytelling from emerging Swedish directors: fiction and nonfiction films that represent the range of contemporary cinema from the star of Scandinavia.
Amateurs (Amatörer)
Dir. Gabriela Pichler
The picturesque Swedish town of Lafors has fallen on hard times: Once a thriving center of leather and textile production, outsourcing has shuttered the factories. In addition, the community's demographics are changing: Immigrants, refugees, and the homeless are now part of the face of Lafors. To stimulate the job market, the town council decides to entice SuperBilly, a German cut-price superstore, into opening an outlet in Lafors. When councilman Musse enlists the help of high schoolers to create a promo film, the results are so hilariously bad that the town recruits a filmmaker from Stockholm. His efforts to portray the town as a bucolic Scandinavian paradise backfire badly, so plucky teenage BFFs Aida and Dana decide to take matters into their own hands, with surprising results. At once light-hearted and socially prescient, this delightfully charming and thought-provoking film is a meditation on globalism, the power of film, and what it means to "represent."
Show times:
When: Friday, October 4 at 6:30 pm
Where: The Rafael Film Center, 1118 Fourth Street San Rafael


When: Wednesday, October 9 at 9:00 pm
Where: The Cinemark Century Larkspur, 500 Larkspur Landing Circle, Larkspur
For tickets and more information, click here.
And Then We Danced
Dir. Levan Akin
Film director expected in attendance.
Sweden's submission for the best international feature category in the 92nd Academy Awards.
In Tbilisi, Georgia, teenage Merab lives in a crowded apartment where the electricity gets turned off as regularly as his phone runs out of data, forcing him to panhandle. After a lifetime of rigorous training alongside his dance/romantic partner Mary, Merab has hitched his hopes for an escape from his circumstances to a coveted slot in the Georgian National Dance Ensemble. But the tradition-bound regional ensemble leader thinks Merab is too "soft" to master the challenging, athletic choreography. The arrival of another male dancer, Irakli-gifted with perfect form and movement, and equipped with a rebellious streak and eyes full of mischief-upends Merab's dedication to the company and his relationship with Mary, with galvanizing results. Levan Akin's gorgeous film is a feast for the senses and an emotional tug on the heart. With his exuberant physicality, star Levan Gelbakhiani-who won the Best Actor award at the Sarajevo Film Festival-shapes Akin's story into a joyous journey of liberation, a coming-out and -of-age tale, and above all, a vibrant, musical celebration of the dance of life.
Show times:
When: Thursday, October 10 at 6pm
Where: Lark Theatre, 549 Magnolia Ave Larkspur


Philip Kaufman's sweeping, unforgettable adaptation of Milan Kundera's classic novel, once thought to be unfilmable, finds Daniel Day-Lewis, Juliette Binoche, and Lena Olin at the height of their talents in an erotic and complex love triangle that spans years and countries. In the halcyon days leading up to the Soviet invasion of Prague in 1968, apolitical, skirt-chasing surgeon Tomas (Day-Lewis) enjoys a life free of the weight of emotional entanglements, particularly with his like-minded painter mistress Sabine (Olin). But when he meets shy waitress Tereza (Binoche), he decides to give "traditional marriage" a try before the three individuals get swept up in the Prague Spring. Grand in its scope and intimate in its detail (aided in no small part by Sven Nykvist's masterful cinematography), The Unbearable Lightness of Being, which Kaufman (The Right Stuff) adapted with Jean-Claude Carrière (Belle de jour), is presented in a brand new, glorious 4K restoration by the Academy Film Archive and The Film Foundation, with funding provided by the George Lucas Family Foundation.
Show time:
When: Saturday, October 12 at 5:00 pm
Where: The Rafael Film Center, 1118 Fourth Street, San Rafael
For tickets and more information, click here.
Out Stealing Horses
Guests expected in attendance: Hans Petter Moland


A recently widowed man's return home prompts painful and elegiac memories in this moving and visually entrancing adaptation of Per Petterson's bestselling eponymous novel. When Trond (Stellan Skarsgård-surly, silent, and still supremely sexy) returns to Norway after 40 years in Sweden, he claims that he longs simply to be left alone. But a winter night's encounter renews a connection that tracks back 50 years to a summer spent with his father, a pivotal time of revelations both joyous and painful, etched with the scars of WWII. Fifteen-year-old Trond is drawn to neighbor Jon, an intense young man, and his beautiful mother whose lives are upended after a terrible tragedy. Aided by breathtaking cinematography (which won a Silver Bear for Outstanding Artistic Contribution at the Berlin International Film Festival), acclaimed director Hans Petter Moland (In Order of Disappearance, MVFF 2014) vibrantly brings to life this heart-stoppingly beautiful saga of shared and split loyalties between fathers and sons, husbands and wives, neighbors and nations.
Show times:
When: Saturday, October 5 at 11:15 am
Where: The Cinearts Sequoia (Sequoia 1), 25 Throckmorton Ave, Mill Valley
When: Monday, October 7 at 5:30 pm
Where: Lark Theatre, 549 Magnolia Ave, Larkspur
For tickets and more information, click here.