This is an interview article with H.E. Anne Höglund, the Ambassador of Sweden to the Republic of Korea published by Yonhap News Agency on 9 May, 2018.

SEOUL, May 9 (Yonhap) -- Although she isn't a football expert, Sweden's Ambassador to South Korea Anne Hoglund knows what the 2018 FIFA World Cup can do for the two countries: help them get to know each other better.

"It's fantastic that we're in the same group," Hoglund said in an interview with Yonhap News Agency on Tuesday. "Like you are here now, talking with us and asking (about) football, that's the way of getting know each other. So, it's something positive."

Hoglund said she is not worried that a sporting rivalry at the World Cup may spill over to off-the-pitch clashes. She believes that there's not going to be any awkward moment between South Koreans and Swedish people after the match.

"I think sports should bring people together, not divide them," she said. "It should be something fun." 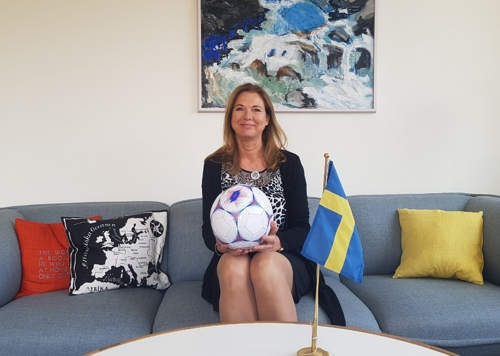 Hoglund, who came to South Korea in 2015, admitted that she doesn't follow football, but she is always surrounded by fans.

"I have three children and two of them like playing football," she said. "My husband also plays a lot of football, so they watch football and follow their teams."

Although many people would think the Swedish people are more into winter sports, Hoglund said that football is actually the biggest sport in her home nation. There are roughly 1 million people playing football in 3,000 clubs and organizations under the Swedish Football Association.

"Football is something that everyone can play easily," she said. "For most winter sports, you need much equipment and you need to go certain places. But football -- you just need the ball."

Sweden reached the 2018 World Cup by beating football powerhouses Italy in the playoffs. It will be their first appearance at the top FIFA event since 2006.

Hoglund said Sweden's World Cup opener against South Korea is going to be an exciting match, considering that both have talented players.

As a Swede, Hoglund said she wants to see her home country get a win against South Korea. But she refused to give her prediction for the score. Sweden have a better head-to-head record against South Korea with two wins and two draws, but the last time the two teams played each other was in 2005.

When asked about her thoughts on South Korea's World Cup performance, Hoglund said South Korea will post good results and watching Sweden and South Korea both advance to the round of 16 would be "fantastic."

"Koreans are normally good at succeeding in what you set out to do," she said. "So, I hope Korea will make good results."

It was confirmed recently that Sweden's veteran striker Zlatan Ibrahimovic is not going to the World Cup. Hoglund said that's something that the Swedish national team have to cope with in Russia.

"You can't expect very big stars to always be on the team," she said. "Of course, I think it's fantastic to have him on the squad, but we'll have to manage that."

Hoglund said the Swedish Embassy in Seoul has yet to plan any special event for the match between Sweden and South Korea, but there will be an opportunity to talk about the World Cup next month.

"We have our Sweden Day on June 7th and we'll have a theme called 'Playful Sweden,'" she said. "We'll highlight the World Cup games there."

Hoglund said that Sweden and South Korea haven't done much in the way of sports exchanges, but she hopes such activities can happen following the PyeongChang Winter Olympics, which took place in February this year, and also the World Cup.

"I found that very inspiring that both countries playing in the women's curling final together at the Olympics, and I think it could be something that can be developed," she said. "With this (upcoming) football match, maybe we get to know each other well and make something."