Openly about politics with the ambassador – H. E. Jan Lundin

Recently, Sweden has gotten a new government statement, new budget and a new foreign minister, Ms Ann Linde. Below we read an article where ambassador of Sweden H.E. Jan Lundin gives his views on some of both Sweden’s, Serbia’s and Montenegro’s most important topics today. 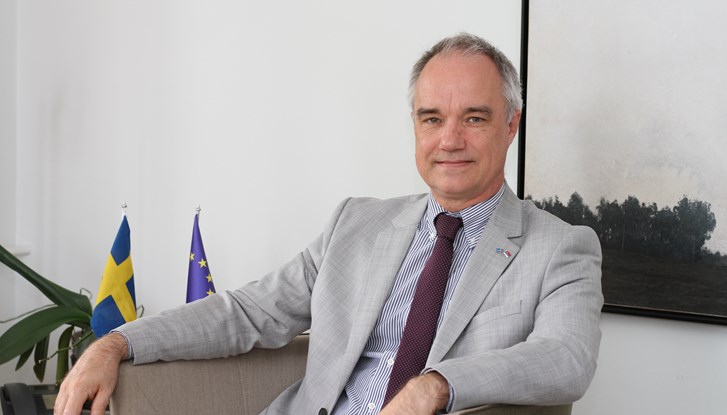 H.E. Ambassador Jan Lundin
Drive for democracy
“Democracy, the way we see it in Sweden and the EU, is threatened in many ways in the whole world. Conservative powers are growing stronger and sometimes, human rights are abused. Sweden wants to work globally with these matters, but also at the local level in Serbia and Montenegro” said ambassador Lundin. “How this shall be accomplished, remains to be seen, but there are possibilities to work at both governmental and local level through various seminars, discussions and events where Sweden fights for EU values.”

Projects of the Embassy
“A feminist foreign policy is important to implement, since equality and women’s rights are significant when strengthening the society and democracy. The Swedish Embassy plans to, for example, organize a seminar on feminism in Sandzak, Novi Pazar – the Bosniak part of Serbia. It is very important to have a dialogue with Bosniak and Muslim representatives in Serbia, since this is how Sweden can learn what perspective Sandzak has on equality, and if it is in accordance with the Swedish perspective. It is important to have a dialogue on these matters” said ambassador Lundin.

Ms Ann Linde - New foreign minister in Sweden
The foreign policy of Sweden is characterized by consensus and continuity. Ambassador Lundin states that, since Ms Ann Linde has extensive experience from her tenure as Minister for foreign trade, this might also increase the importance of globalization issues in her new job. But ambassador Lundin foresees no fundamental changes in the foreign policy of Sweden.

New European Commission
The new German president of the European Commission, Ursula von der Leyen, stated that she wants to bring the Western Balkan countries closer to the EU. The Commissioner, earmarked for the enlargement portfolio, comes from Hungary, an enlargement friendly country, and ambassador Lundin means that this can be good for the whole Western Balkan region. “However, Serbia and Montenegro need to show tangible results in strengthening institutions and Rule of Law, which may simply take time, regardless of who sits in Brussels. Ultimately, the Council of the EU decides on these matters, not the Commission."

Developments in Serbia and Montenegro
Sweden is supporting Serbia in the environment sector and in the opening of Chapter 27 of the EU acquis. To open Chapter 27, much preparatory work needs to be done and Serbia needs to for example develop its environment ministry so that is in line with the requirements of the EU integration process. As to Rule of Law (Chapter 23 and 24) it is a concern that constitutional reforms, concerning appointments and controls of judges and prosecutors, have been taking longer time than expected. Serbia is also yet to establish a good track record on for example addressing high-level corruption and war crimes, as well as white collar crimes such as money laundering.

Montenegro has had a somewhat better success in working with Chapter 23 and 24 of the EU acquis, for example fighting corruption on high level. “Montenegro has also united their foreign policy with the EU and has, for example, imposed sanctions towards Russia, which Serbia has not done” ambassador Lundin explains.

How is the EU integration contributing to more jobs in Serbia?
“Sweden, one of the biggest bilateral donor countries in the EU family, has allocated around 13 million EUR to Serbia during 2019. The EU has allocated 188 million EUR during 2018, excluding multi-country programmes involving the IPA region, and this is creating many jobs in Serbia. Jobs are automatically created when for example sewer systems are built, and when different projects are financed. European and Swedish companies, such as IKEA, Ericsson and Tetra Pak, are investing in Serbia which is also creating many jobs. IKEA has for example hired hundreds of people while taking a corporate social responsibility. The number of jobs in Serbia are increasing and the EU is a part of this” said ambassador Lundin.

Environment protection leading to more jobs
The work with adapting to European standards when it comes to environment, water treatment and waste management will create, and is already creating, many jobs. “I am quite optimistic when it comes to working with environmental questions in both Serbia and Montenegro. In addition to environmental reforms supported by the international community and IFIs, it is also in the interest of the business community to see the environment treated well, and it may contribute in various ways. As an example, I could mention that the investors in Lustica Bay demanded a water treatment facility to be built, rather than to pump untreated sewage into the sea, and this was done.”

Why young people should stay in Serbia and Montenegro
“Today, countries in the EU are facing serious shortages in labour force and people are ageing. Therefore, it is fully possible for a young person to leave Serbia or Montenegro in order to work in a foreign country where labour force is demanded, and where the salary is higher. However, I believe that many young people will choose to stay in Serbia and Montenegro since the unemployment is decreasing, salaries are increasing, and more jobs are being created. ‘Blood is thicker than water’” ambassador Lundin said, referring to the fact that one will leave friends and family at home if moving abroad, and that friends and family are important. “One should not automatically believe that a high salary equals a better life.”

Chess in Ulcinj, Montenegro
In November, ambassador Lundin will travel to Ulcinj, Montenegro to play the European Club Cup in chess, where he represents Berlin. “This is going to be fun as Europe’s best club teams will gather for one week to play against each other. It is perhaps a dull season to visit the natural beauty of Ulcinj, but it is ideal for playing chess” ambassador Lundin concludes.

We wish him the best of luck in the European Club Cup!


About the author
Hana Biberovic is a B.A. graduate in European Studies, currently complementing her studies by doing a traineeship at the Swedish Embassy in Belgrade – Department of Politics, Trade and Public Diplomacy. Earlier, Biberovic worked as a trainee at the European Commission Office in Sweden, where her interest for working in the EU institutions rose. This led i.a. to Biberovic working as a Student Ambassador for the EU institution EPSO, while completing her final year of her B.A. studies.