On 14-15 October a delegation led by the Swedish Minister for International Development Cooperation, Peter Eriksson, visited Jordan. The visit was part of a regional trip, including Lebanon and Palestine. The focus of the visit was environment and climate change, freedom of speech and the humanitarian situation in the region. 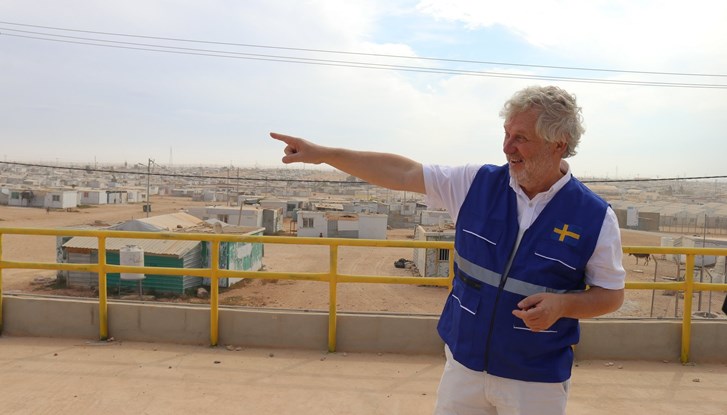 During the visit, Minister Eriksson and his delegation met with organizations that are relevant for Swedish international development cooperation. The first day the delegation met with representatives from the podcast studio Sowt, financed by International Media Support, IMS, which receives support from Sweden for activities in the Middle East and North Africa. Sowt is a good example of independent journalism and how Sweden promotes freedom of expression in the region. Sowt produces podcasts in Arabic and talks about issues that might be controversial in the region, such as abortion, interreligious marriages and shame.

During the visit to Zaatari Refugee Camp in northern Jordan, where approximately 80. 000 Syrian refugees live since the beginning of the Syrian crisis, the delegation met with representatives from different UN agencies, such as UNHCR, WFP and UNFPA. The humanitarian situation in Jordan was discussed throughout the visit, in Zaatari and during a dinner with country directors of several UN organizations.

Before the delegation continued to Jerusalem, they met with the organization EcoPeace by the Dead Sea. EcoPeace is a Jordanian-Israeli-Palestinian civil society group working with environmental, climate and water cooperation between the three countries. The meeting by the Dead Sea focused on the Jordan River and water scarcity in the region. Before Minister Eriksson continued to Jerusalem, he expressed gratitude for ample valuable impressions in the Kingdom.