Acne Studios was awarded the Government’s Cultural and Creative Industries Export Prize by Minister for EU Affairs and Trade Ann Linde on 24 May 2018. This is the first time the prize has been awarded to highlight the breadth of the cultural and creative industries and their contribution to Swedish exports, and the promotion of Sweden as an innovative and creative country. 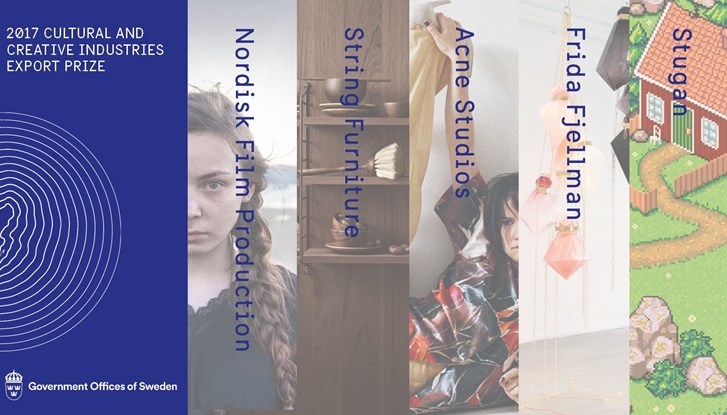 Frida Fjellman, who belongs to an exclusive group of Swedish artisans. She has created her own niche in contemporary visual and design arts, fêted by both Art Basel and Design Miami. Frida Fjellman shifts the boundaries for Swedish handblown glass and glass arts. She has been designing products for Kosta Boda since 2016 and her work is sold by Kosta Boda stores and its international partners.

Nordisk Film Production Sverige for the film ‘Sameblod’ (Sami Blood), the first feature film with dialogue in the South Sami language. The film portrays the Sami minority’s struggle and the main character’s difficult choices and sacrifices in 1930s Sweden. The film has enjoyed international success and been screened at more than 100 film festivals across the world on all continents. ‘Sameblod’ has received several prestigious awards, including the European Parliament’s LUX Film Prize.

String Furniture AB. The String bookshelf was designed in 1949 as an entry to a competition held by the Bonnier publishing house, but its real breakthrough came after the Helsingborg Exhibition in 1955. In 2005, production of Nisse and Kajsa Strinning’s classic bookshelf was resumed when Pär Josefsson and Peter Erlandsson entered the picture and relaunched the bookshelf. In coming years, the focus on international expansion will continue.

Oskar Burman, Jana Palm, Tommy Palm and Karl Magnus Troedsson for ‘Stugan’, an international creative meeting place that is resonating across the world of video games. In a red cottage (stuga) in Dalarna, some 30 game developers develop their game projects. Stugan is entirely financed by donations and the participants retain all the rights to their games. The participants in Stugan are called ‘Stuganeers’ and come from countries including New Zealand, Kenya, Mexico, the EU and the US.

Back To Italy, Rome