Sweden and Indonesia have an ongoing dialog sharing experiences and knowledge on UNSC issues in anticipation of Indonesia taking its seat as a non-permanent member in the United Nations Security Council. On Monday 10th of December a third round of bilateral consultations will be held at the Indonesian Ministry of Foreign Affairs and H.E. Ambassador Olof Skoog, Permanent representative for Sweden in the UN will lead the Swedish delegation. Ambassador Skoog will share experiences from his work in the Security Council during the last two years. 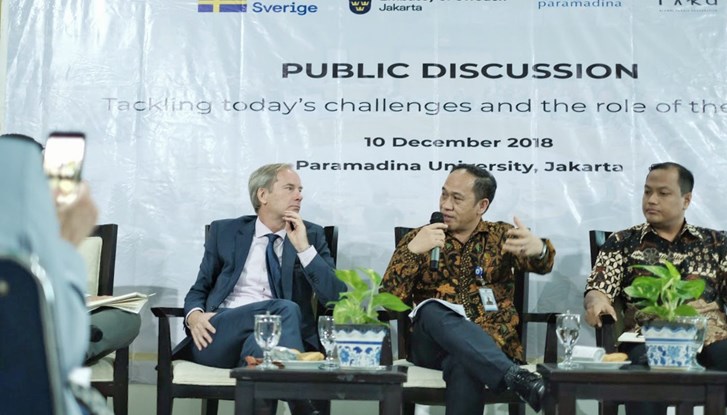 In connection to Ambassador Skoog's visit, the Embassy of Sweden together with Paramadina University is initiating a panel discussion on overcoming today's challenges and the role of the United Nation Security Council (UNSC) with a focus on women, peace, and security. The event will take place at Paramadina University on 10 December 2018, which also marks the International Day of Human Rights.

Ambassador Skoog will be one of the panelists, alongside Mr Achsanul Habib, Director for Human Rights and Humanitarian Affairs, Kemlu, Dr Fitriani, Doctor of Philosophy degree in Security and Defence, CSIS, as well as Dr Ahmad Khoirul Umam, lecturer at Paramadina University.

The panelists will speak about today's challenges and the role of the UNSC from a Swedish and Indonesian perspective as well as discuss how Sweden and Indonesia can cooperate in the future. Furthermore, women's role in peacekeeping and peacemaking will be discussed as well as how an active Indonesian role in the UNSC can boost ASEAN's stability.

Sweden is close to end its two-year period as an elected member in the security council. Many of the global challenges that have been on the UNSC Agenda during this time will stay for yet some more time. Indonesia, as one of the incoming elected members to the UNSC, will have an important role to play when confronting a complex and challenging world.
Despite a difficult time, Sweden will end its two-year work in the UNSC with important achievements. The founding base of Swedish diplomatic work is always to try to establish trust and to show commitment; to establish trust by a virtue of firmness and responsiveness, by standing by the words and demonstrating the power of action.

- A value based and result oriented membership has contributed well to the overall work within the UNSC and Sweden's work in the Security Council has contributed to deepen the knowledge and commitment to finding solutions to complex issues, ambassador Marina Berg says.