Alumni Reception to Welcome Swedish Universities Participating at the EHEF 2018 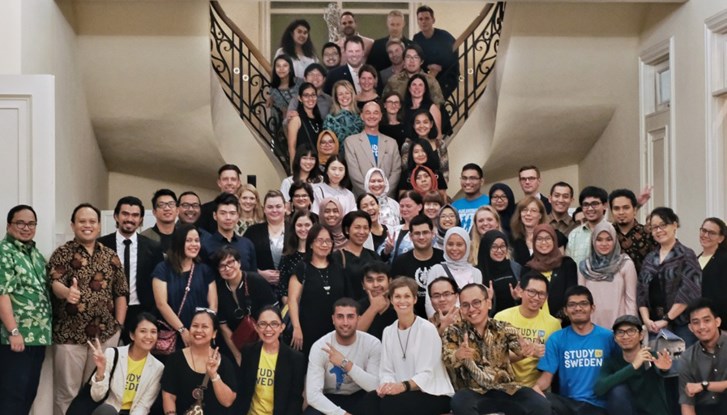 In conjunction with the European Higher Education Fair (EHEF) Indonesia, on Sunday 11 November the Ambassador of Sweden to Indonesia Marina Berg hosted a reception at the Swedish Residence in Jakarta. This yearly reception is one of the most looked forward to by the members of Alumni Swedia, a great occasion where they have the chance to meet and greet with the representatives of the Swedish Institute and the Swedish Universities participating at the EHEF. The Ambassador, who just presented her credentials a few days earlier, expressed her highest appreciation to universities and alumni joining the EHEF and congratulated them for the success. The event has been made possible with the generous support from the Swedish Institute.

Welcoming 45 alumni, 20 university representatives and the Manager of Study in Sweden – Indonesia Project Niklas Tranaeus , Ambassador Marina Berg remarked that despite changes in the LPDP (Indonesia Endowment Fund for Education) regulations, number of students coming to Sweden has grown significantly during the period of 2014 to 2017. She acknowledged that support from LPDP in 2014 has sparked the notion of Sweden as study destination. In the future, due to minimum quota shared by LPDP, the success of Swedish higher education promotion might rely vastly on its intangible asset including strong ties between the alumni association and the Embassy.

However, the ambassador assured that SI and the Embassy will continue to support the promotion of Swedish higher education in Indonesia and the role of alumni in promoting Sweden in is deemed important. To encourage further collaboration between companies, universities and government of Sweden and Indonesia, she looks forward to collaborating with Alumni Swedia to arrange internship opportunities to for Indonesian students in Sweden to intern at Swedish companies.

Following the opening remark, Niklas Tranaeus from the Swedish Institute also expressed his appreciation and gratitude that year by year the enthusiasm towards Swedish higher education had been gradually increasing.  Next, the chairman of Alumni Swedia Mochammad Fadjar Wibowo – a Swedish Institute Scholarship at Karolinska Institutet alumnus – presented the update on the organization’s growth, as well as the organization’s efforts in bridging communication and network among its members as well as between Alumni Swedia members and the Swedish Embassy in Jakarta.