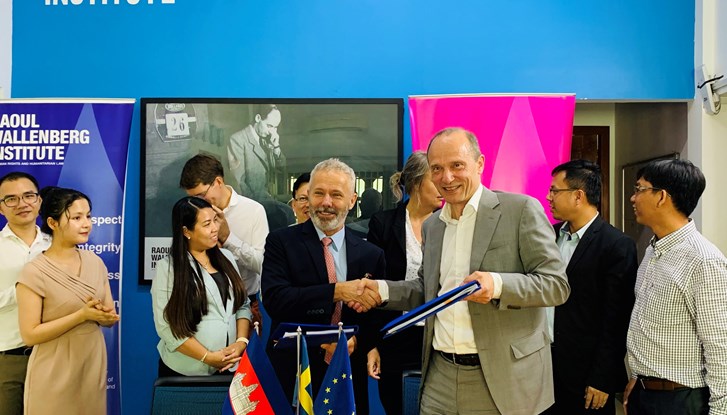 The Embassy of Sweden signs an agreement with Raoul Wallenberg Institute of Human Rights and Humanitarian Law (RWI) aiming at strengthening the academic institutions in Cambodia to progressively contribute to the promotion of human rights and gender equality.

The three-year agreement (2020-2022) is worth 30 million SEK (approximately 3.2 million dollars). It will allow RWI to continue supporting human rights education for the next generation of Cambodian decision-makers. Further, RWI will be able to support research in the area of human rights including gender and environment, and to enable work of platforms which can contribute to better informed debates and increased cooperation between various sectors in society.

RWI’s activities have significantly contributed to improving knowledge of human rights, gender equality and the principles of the rule of law among citizens and in the public sector in Cambodia over the past years,” said Mr. Samuel Hurtig, Head of Development Cooperation in the Embassy of Sweden. “We are pleased to continue partnering with RWI. This support is in line with Swedish government’s Strategy for development cooperation with Cambodia and Drive for Democracy with a promotion and protection of human rights at the core.”

“We are very much looking forward to continue and strengthen our partnerships in the human rights field in Cambodia. I feel privileged to have been part of this successful work so far. In particular, the achievements of our alumni are good reason to be optimistic about what the future could bring for people in Cambodia”, said Ms. Hanna Johnsson, Director of RWI´s Cambodia office.

Back To Cambodia, Phnom Penh