A rural Cambodian Girl takes a role of Swedish Ambassador 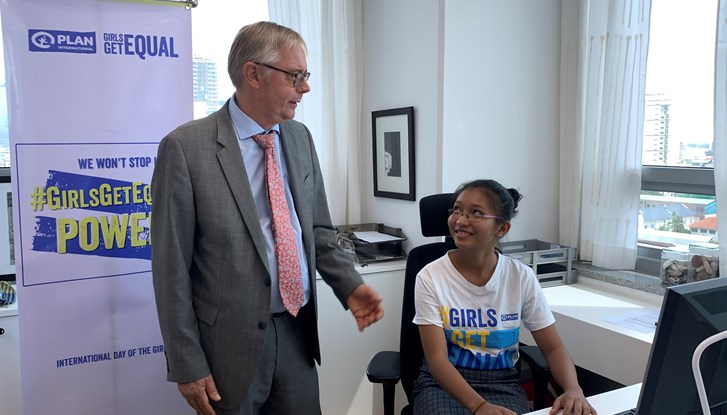 Ambassador Björn Häggmark (left) is handing over his role to Sreyphea, 15, from Stung Treng province, as part of Girls Take Over initiative. (c) Mengey Eng

Phnom Penh (11 October 2019) - Sreyphea, 15, from Stung Treng province, is taking over the role of Swedish Ambassador to the Kingdom of Cambodia as part of the International Day of the Girl celebration. Organized by the Embassy of Sweden and Plan International Cambodia, the initiative known as #GirlsTakeover aims to showcase girls' agency and capabilities as leaders, while at the same time highlighting gender issues.

“In my community, girls face many issues including child marriage, school dropout, negative gender stereotypes, and lacking of girls’ role models. Child marriage is the most pressing issue that I want to address,” Sreyphea says.

“#GirlsTakeOver gives me an opportunity to discuss the issue of early child marriage with the Swedish embassy. I would like to know what can be done to end child marriage so that girls can reach their full potential,” she adds.

The #GirlsTakeover is a​​ global movement to call for social and political change to tear down barriers of discrimination and prejudice that continue to hold girls back. Through the movement, girls occupy spaces where they are rarely seen or heard and making it clear they have the right to be there without being silenced or ignored.

“Sreyphea’s day at the Embassy is an opportunity to highlight girls’ rights in various ways, as part of Sweden’s feminist foreign policy and drive for democracy. With this acting role as a leader, she can raise girls’ issues from her community to ensure that girls' needs and rights are not overlooked,” said Mr. Samuel Hurtig, Chargé d' Affaires of the Embassy of Sweden.  “When a girl like Sreyphea gets equal opportunities and chances in life, she can transform her life and her community, being part of creating a world that is better for everyone.”

From Sweden to Cambodia, and more than 50 other countries around the world, in celebration of International Day of the Girl hundreds of girls are stepping into the roles of leaders in business, politics, media and entertainment, for a day to demand equal power, freedom and representation for girls and young women.

Cambodian women and girls face structural disadvantages and gender inequalities across many aspects of their personal, community and work lives. This includes lack of economic empowerment, low levels of participation in public decision-making and political empowerment. Women and girls are also victims of physical violence and meet personal safety concerns.

“Girls worldwide face a wall of resistance in their struggle to progress and realise their dreams. They often have no power over the decisions they make or the choices they have, and when girls are given the space to speak and take over leadership positions, they clearly articulate their thoughts, dreams and ideas. ,” said Gwynneth Wong, Country Director of Plan International Cambodia.

Achieving gender equality is one of the Global Sustainable Development Goals that were agreed by world leaders in 2015 and which promise to transform the world by 2030. The Swedish government and Plan International call for increased investments in girls’ and young women power, voice and leadership to end child marriages.

Back To Cambodia, Phnom Penh