The goal for Swedish development cooperation within Market Development in Tanzania is to contribute to "a strong private sector that creates decent employment opportunities for people living in poverty". 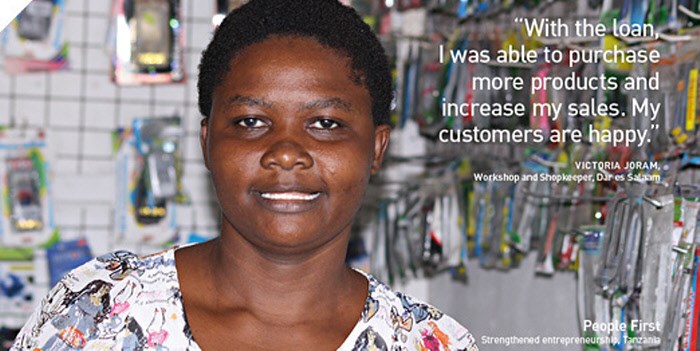 For full story see link at the bottom of the page

The Tanzanian economy has experienced high growth rates during the last decade at around 7 percent but with a population growth of around 3 percent, per capita income is growing slowly. Tanzania's national poverty rate has decreased from around 49 to 28 percent while the international poverty rate is around 48 percent. The absolute number of Tanzania's poor is still about 12 million which is almost the same as in 2007 and which sets Tanzania as among the top 4 in SAA on the total number of people living in poverty.

The private sector, especially the informal, is the main creator of employment opportunities in the Tanzanian economy. It is estimated that there are 3.1 million micro, small and medium sized enterprises (MSMEs) in Tanzania. However, too few productive jobs are being created in the economy to enable a larger share of people generating more income and escape income poverty. The reasons behind this are many. In Tanzania, 65 to 70 percent of the labour force is active in agriculture sector. Yet, agriculture only contributes to about 1/3 of Tanzania's GDP. The sector is characterized by low productivity, high levels of poverty, unskilled labour, weak infrastructure, underdeveloped value chains, asymmetric information, subsistence farming and low levels of commercialization

Barriers that prevent growth from benefiting the poor in Tanzania are, amongst others: Access to financial services, extensive trade barriers, limited land rights, low productivity in the agricultural sector and a non-conducive business environment.

The Swedish support is channeled through a variety of actors such as UN organs, challenge funds, private actors and Public Private Development Partnerships. The Embassy’s private sector development portfolio aims to address constrains that prevents the poor to benefit from the market and to create employment opportunities.

Currently the combined private sector and agriculture portfolio contains a number of programmes with the following objectives:

Financial Sector Deepening Trust (FSDT) is a joint collaboration between several donors and the Tanzanian government. FSDT is working to enable more people to access affordable financial services and has been supported by Sweden since 2008. Support to inclusive economic growth and decent employment is given through support to the OneFund and UNDAP. Increased income, agricultural productivity and improved value chains are supported through Africa Enterprise Challenge Fund (AECF), Agricultural Markets Development Trust (AMDT), and Coffee Farmers Alliances Tanzania (CFAT). Tanzanian Horticultural Association (TAHA) is promoting the horticultural sector in Tanzania through policy dialogue, improved productivity and trade facilitation.