Sweden in the UN Security Council

After being elected by a wide margin to the United Nations Security Council, Sweden was a non-permanent member of the Council for the 2017–2018 term. As a principled member of the United Nations Security Council, Sweden took its cue from the foundation stones of international law, human rights, gender equality and a humanitarian perspective. The Swedish working method was characterised by listening, creativity, active diplomacy and an ambition to achieve results. We are grateful for the good cooperation with partners during our tenure. 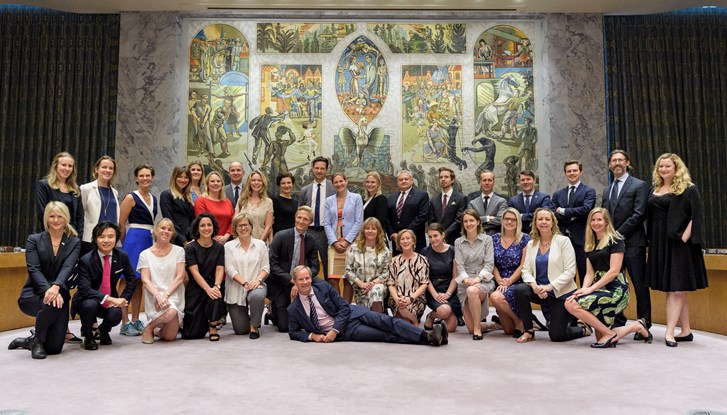 The Swedish UN Security Council Team at the end of the Swedish Presidency in July 2018.

During the membership of the UN Security Council 2017-2018 Sweden has:

1. Safeguarded the fundamental UN concept of cooperation for peace and security

There is a need for more cooperation and less isolation to address the global challenges of our time. The UN Security Council has a unique task and must shoulder its responsibility for international peace and security. By being a committed, prepared, principled and solution-oriented member of the Security Council, Sweden has contributed to safeguarding the fundamental UN concept of cooperation for peace and security.

Sweden consistently pursued efforts to advance the women, Peace and Security (WPS) Agenda. As a member, we consistently sought to ensure that the Council included a focus on WPS in all discussions and decisions. Sweden also sought to ensure that the Council takes a clearer stance against sexual and gender-based violence, and sexual abuse committed by deployed personnel. During Sweden’s Presidency in July 2018, we ensured gender balance among those briefing the Council, for the first time ever.

3. Stood up for international law and the humanitarian perspective

During Sweden’s first Presidency in January 2017, we pursued conflict prevention diplomacy and sustaining peace in practice. At that time, the Council successfully worked for a peaceful transfer of power in the Gambia when the country teetered on the brink of unrest and violence. During our Presidency, we also organised a ministerial-level open debate on conflict prevention, during which the new Secretary-General Antonio Guterres had the opportunity to address the Council for the first time.

In the work on the UN’s peacekeeping operations, we have helped put focus on the importance of political solutions and support of the Secretary-General’s reform agenda.
In 2018, Sweden has been the Council’s focal point for the UN Peacebuilding Commission. In this capacity, we have promoted strategic cooperation for sustainable peace, not least in the transition between different types of UN presence in countries that have undergone conflict.

5. Made a difference in some of the worst crises of our time

The Security Council addresses the most severe crises of our times on a continuous basis. There are serious deadlocks on certain issues. Despite these, Sweden has contributed to progress on some of the most difficult issues. A few examples:

Yemen: Sweden has worked to increase the Council’s engagement in Yemen The international attention, including from the Council, contributed to consultations being held between the parties in Sweden in December 2018, resulting in the Stockholm Agreement.

Myanmar: We have successfully worked to repeatedly call the Security Council’s attention to the alarming situation of the Rohingya people. As President, we organised an important discussion on Myanmar in July 2018, during which the Special Envoy could brief the Council for the first time.

Horn of Africa: During Sweden’s Presidency in July 2018, the Security Council commended the signing of the Joint Declaration of Peace and Friendship between Ethiopia and Eritrea. The Declaration represents a historic opportunity for peace and cooperation between the two countries, which is crucial for positive and sustainable development across the Horn of Africa.

Syria: Sweden co-led the negotiations which resulted in the Council safeguarding continued cross-border humanitarian access, which has helped to facilitate assistance reaching millions of people.

6. Contributed to consolidate and strengthen the group of elected members

By uniting and strengthening the ten elected members (E10) as a group, Sweden has sought to contribute to better addressing deadlocks that can emerge. In November 2018, Sweden and South Africa (incoming member 2019-2020) organised the first meeting at capital city level of current and incoming elected Security Council members in Pretoria to strengthen this cooperation.

7. Contributed to strengthened cooperation between the Security Council’s European members

8. Contributed to raise and firmly anchor climate change on the Security Council agenda

During Sweden’s tenure the Security Council has been able to unite on clarifying the connection between climate change and security in a number of statements and resolutions. During Sweden’s Presidency in July 2018, the Swedish Minister for Foreign Affairs Margot Wallström led a debate in the Council on climate-related security risks, which was the first time the Council had discussed this issue since 2011.

The Security Council’s Working Group on Children and Armed Conflict (CAAC) gained new impetus during Sweden’s chairmanship. Conclusions containing specific recommendations on children and armed conflict have been adopted for a record number of countries, and the working group has conducted several field trips to gain direct input from actors on the ground. During our Presidency in July 2018, Prime Minister Löfven led a high-level meeting on children and armed conflict on the theme ‘Protecting Children Today Prevents Conflicts Tomorrow’. Sweden presented a resolution at the meeting, which was adopted by a unanimous Security Council as resolution 2427. A record number of Member States (98) chose to be co-sponsors to the resolution, which had a prevention focus. Sweden has also pushed to strengthen the Security Council’s work concerning youth, peace and security. Sweden and Peru co-led negotiations that resulted in the Council adopting a comprehensive resolution on the issue (resolution 2419) on 6 June 2018.

10. Increased the transparency of the Security Council

We have given a voice in the Security Council to those affected by the Council and made the work of the Council more accessible to more people through the active use of social media. During our two presidencies, we invited ministers from Mali, Iraq and Colombia, as well as civil society representatives from the DRC, Colombia and Chad. We welcome the fact that this working method has been adopted by several members of the Council.

To read more about Sweden in the UN Security Council visit; https://www.government.se/government-policy/sweden-in-the-un-security-council/